Tartu is situated in southern Estonia and connects to the world through Lennart Meri Airport in Tallinn and Tartu Airport. It is also possible to reach to Tallinn by ferry from Helsinki (Finland) or Stockholm (Sweden). Easiest way to get to Tartu from Tallinn is by bus.

The distance between Tallinn, Estonia's capital, and Tartu is approximately 200 kilometers, or about 2.5 hours by express coach. There are hourly Lux Express buses which take passengers from the Tallinn Airport (stop “Tallinna lennujaam” in Estonian) on their way to Tartu. Buses are comfortable and most of them have WiFi connection.

If you wish to get on the bus at the airport, it is advisable to buy the ticket in advance online and print out the ticket yourself. It is possible to purchase tickets up to 15 days in advance at the Tallinn and Tartu bus station ticket offices as well as online, including the possibility to board and exit at stops „Tallinna lennujaam“ (Tallinn airport), „Tartu Näitused“ (next to the campus of Estonian University of Life Sciences (EULS), near “Torn Hostel”), "Raeplats" (next to the City Hall) and „Tartu Bussijaam” (Tartu Bus Station, which is situated in the city centre close to many hotels).

If your flight arrives in Tallinn airport during midnight, we advise you to order a ticket at internet site Airport Shuttle, to reach to Tartu. Airport Shuttle service waits for late night flights and takes each passenger to his/her destination in Tartu. 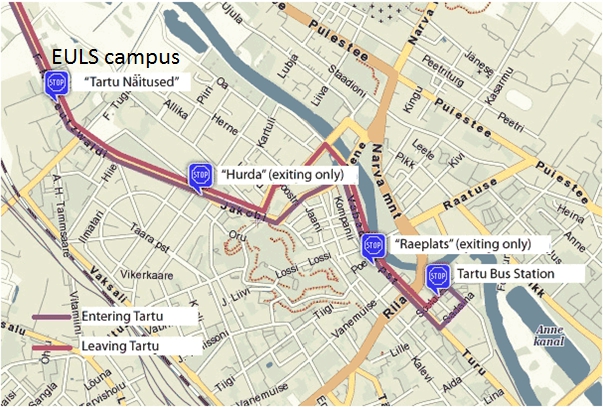 The distance between Tartu Airport and the city centre is about 10 kilometres and you can take either Airport Shuttle bus or a taxi. Airport Shuttle leaves from Tartu Airport to the city in about 15 minutes after the plane has arrived, but also waits for anyone who needs the ride to the city. And if booked earlier it picks you up from anywhere in Tartu and takes you to the airport.

For a fee of 5 EUR the shuttle will drop you off at any place in Tartu city and the ticket can be bought either in cash or with a debit/credit card from the driver.

The taxi stop is also located in front of the terminal. The taxi might cost around 10 EUR to the city centre.

You can also fly to Riga Airport in Latvia and take the bus to Tartu. List of airlines flying to Riga is available here. From Riga Airport to Tartu it takes approximately 4,5 hours by bus and the bus schedule is available at the Lux Express homepage and Ecolines homepage.

From Stockholm and Helsinki, there is also a ferry connection to Tallinn. It is especially frequent from Helsinki, hence planning your route through there will not add much to the total duration of your trip. More information is available at the Port of Tallinn homepage.

When taking the ferry to Tallinn, the best way to get to tartu is taking the train. Trains from Tallinn train station to Tartu leave 3–4 times a day and it takes a little more than 2 hours to get to Tartu. The train station is situated just outside the Tallinn Old Town and sea port. You can take a taxi or tram No. 2 (from the sea port) to the train station (stop "Balti jaam" in Estonian). Trains are rather comfortable and you can use WiFi in the first class.

Estonia has bus links with major cities in Germany, Poland, Russia, Ukraine and the Baltic countries. Due to the relatively short distances, coach trips from Riga and St. Petersburg are a good alternative to air travel. Both cities have direct connections to Tartu.

You can use public transportation to come to EMÜ campus.

You can also use taxi services. From centre to the univeristy, the cost is around 5–7 euros.