AS Grüne Fee Eesti is an Estonian-Finnish joint company that was established in 1993 on the basis of gardening farm Anne of the former Luunja sovkhoz. The company is situated in the village of Väike-Lohkva that is adjacent to Tartu. The primary activities of the company include year-round growing of cucumber, lettuces and herbs in greenhouse. As the largest producer of this business area in Estonia, we employ about 100 people whose work results in growing healthy supplements to consumer’s table.

As the first in the Baltics, Grüne Fee Eesti started using an innovative technology which enables to grow vegetables regardless of the current season due to extra light. This has increased crop yield and made domestic vegetables available all year long. Biological pesticides are used for fighting plant pests so that the latter are killed by predators of the pests instead of the chemicals. This precludes the possibility of contamination with chemical pesticides and ensures high quality of end production. The products of AS Grüne Fee Eesti conform to the quality requirements of domestic production sign “Eestis kasvatatud” (Grown in Estonia).

In addition to Estonia, the products of Grüne Fee Eesti are familiar to the consumers of Latvia, Lithuania and Finland and, hopefully, soon in Sweden. The company is planning to increase the growing area and to diversify the product range. 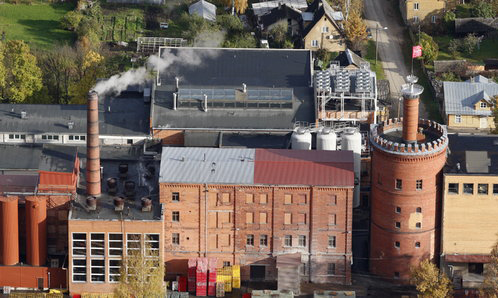 A. Le Coq is the oldest and biggest drinks manufacturer in Estonia. The company was founded in 1807 by a Prussian family of the same name, who were descendants of the Huguenots who had fled France in the 17thcentury.

The brewery's product portfolio includes 11 different product groups. The main product group is beers, followed by juices, waters and soft drinks, and the remaining product groups such as ciders, light alcoholic beverages, Active juice drinks, sports and energy drinks, syrups and kvass. A. Le Coq holds the leading position on the Estonian drinks market in the categories of beer, juice, and long drinks and ranks a strong second in the production of water, soft drinks and cider.

The company is dedicated to the preservation and development of good drinking culture in Estonia by valuing old manufacturing traditions as well as taking an innovative approach to updating its product portfolio so it can offer consumers new and healthy flavour combinations. As the oldest brewery in Estonia, A. Le Coq is promoting Estonian beer culture and training both the service sector and consumers under the name Beer Star since 2011 with the goal to improve the quality of serving beer in Estonian pubs and restaurants. The Beer Star quality sign is accredited to pubs and bars that have successfully passed the course and are serving beer excellently.

A.Le Coq has been awarded the title of the most competitive company of the Estonian food industry for seven years in a row, which is the result of our constant commitment to product quality and product development. The company has already invested 73 million euros in production and product development, which has made it one of the most modern drinks industries in the Baltic States.

A. Le Coq Ltd belongs to Olvi Group. Other members of Olvi Group inlcude the holding company in Finland (Olvi Oyj) and breweries in Latvia (Cesu Alus), Lithuania (Volfas Engelman) and Belarus (Lidskoe Pivo). All companies that belong to Olvi Group share the same mission and vision. Although these companies operate in different countries, their business strategy and values are similar.

Over the years, we have supported initiatives in the areas of education, research, culture and sports and in the social sphere with money and in other ways. A. Le Coq is the most successful company in the Tartu region, which means that contributing to its development remains important to us. Read more about our support activities HERE.